Why We’re Excited About the New 2018 Camaro 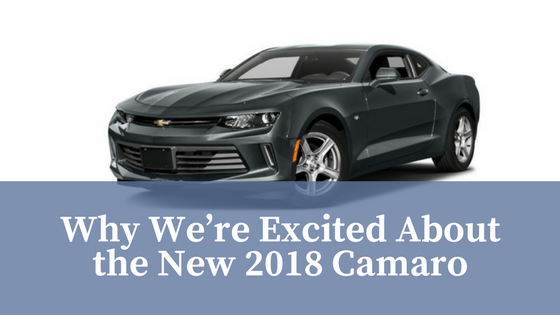 Few things in life can get your blood pumping like the thrill of piloting a premiere sports car. The exhilaration, speed, sounds, rumble and the sheer power we control under our right foot is an intoxicating combination of rebellion, engineering, and raw fervour.

The Camaro has been one of the single most respected and drooled-over American muscle cars since its arrival in 1967. Bred as a reimagined Nova, the fledgling Camaro was more robust and engineered as a unibody chassis with a separate steel rail subframe in the front. Independent front suspension, drum brakes and leaf spring suspension in the rear made the Camaro modern in its day. Like it’s big brother the Corvette, the Camaro started life powered  by a modest 230 cubic inch straight-6 engine pumping out 140 horsepower to a 3-speed transmission. Following in its family footprint, a Camaro paced the Indy 500 in 1967, like many a Corvette before it.

The first Camaro was lean and aggressive, and featured optional convertible models as well as RS and SS packages which ramped up power to 155 horsepower, or a 210 horsepower 327 cubic inch V8. Over the years, however, the Camaro lost some of its muscle, a casualty of restrictions, emission regulations and the invasion of smaller, more agile European sports cars.

The Camaro dragged itself into the new millennium, leaving production in 2003 until 2010 with the reimagined return of the Camaro gracing the big screen as “Bumblebee” in the Transformers franchise. Retro styling from the 1969 SS model and “coke bottle” profiling helped bring the Camaro back to life. A base V6 version came with 304 horsepower through a 3.6L offering, and the big bad SS came with a 426 horsepower 6-speed manual transmission, or a 400 horsepower 6-speed auto.

The new 2018 Camaro takes what the vehicle meant to folks in the past, and peppers it with modern features that take it from a raw and gritty muscle car, to a refined and poised modern sports car with its roots firmly stuck in generating smiles via horsepower and heritage. We’re excited for the 2018 Camaro because we know what it’ll mean to both its loyal fan-base and new drivers looking to add a bit of zest to their daily commute.

The 2018 Camaro comes with 4 distinct engine options, a fuel-sipping 2.0L turbocharged 4-cylinder that develops a respectable 275 hp and 295 lb/ft or torque while achieving 7.6 l/100km highway. The 3.6L V6 option brings naturally aspirated power into the spectrum, producing 335 hp coupled to an available 8-speed automatic transmission. On the upper end of power comes the beefy 6.2L LT1 & LT4 V8’s which generate 455 hp and 455 lb/ft of torque – or a monumental 650hp and 650 lb/ft of torque thanks to a 1.7L Eaton Supercharger in the LT4.

Aside from the numbers game, the 2018 Camaro is more comfortable, more behaved and more luxurious than ever before. Its received a revamped, chiselled front end, retaining its muscular haunches and wheel wells. It’s also lighter and smaller than the previous model, thanks to aluminum wheels and suspension components, accentuating its performance, handling and road-feel.

Further, it’s loaded to the brim with modern tech that makes it a state-of-the-art competitor in the sports car segment – like available magnetic ride control, 4G LTE Wi-Fi connectivity, heads up display, voice activated controls, and an available 8-inch touch screen. The Chevrolet MyLink app provides a driver-centric platform that helps organize and integrate your mobile technology to make for a convenient and seamless experience; make calls, receive texts and shuffle through music all while keeping your device safely stored away from view.

This is a certified Mustang-killer for 2018. Experience the pedigree, power, thrill and – dare we say – comfort of the new Camaro by visiting our showroom. Let’s put those keys to good use.