The Evolution of Car Security 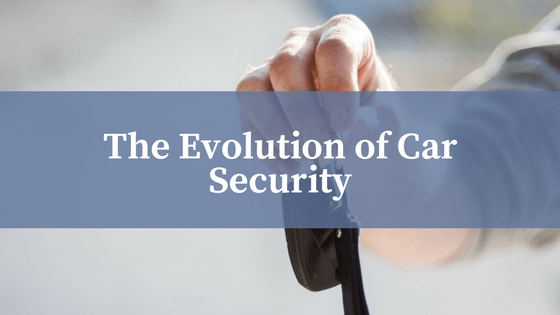 For as long as vehicles have been available to the masses, people have sought to protect them, and it’s no wonder; they’re beautiful, expensive, and people are almost always proud of their vehicle’s – and as a species, we typically seek to protect what we value.

The security efforts offered by automakers and manufacturers have steadily progressed over the years to the point that they’re nearly unsteal-able. Car security has evolved from simple locks to innovative computer-controlled electronics that disable the engine. In this post, we’ll outline some of the inter workings of the history behind vehicle security efforts. Many of these features come standard today and are available with new models of vehicles that we carry at Eagle Ridge GM.

Some of the first car security systems were only affordable by the wealthiest of drivers – namely because these ‘systems’ were drivers that were paid to stay with the car at all times. In 1900, removable steering wheels were invented to deter thieves from making off with the vehicle itself. This was first invented by Leach Auto, and soon thereafter was adopted by many manufacturers.

Power locks were first included on luxury Scripps-Booth vehicles – a company that was later acquired by GM – in 1914, but only became popular as additional equipment in 1956 when Packard reintroduced the idea.

The first door locks to be included on cars were housed in cylinders with the lock code on the outside of the vehicle. Back then locks were only included on passenger doors, trunks and glove compartments, but today are included on fuel filler caps, some even automatically lock when the car is put into gear or reaches a certain speed on the road.

The history of the car alarm has a particularly interesting past; one of the first models ever invented was created by an unnamed prisoner from Denver in 1913, as noted by the April 1913 issue of Popular Mechanics Magazine. It was manually armed and was only triggered when someone would try to crank the engine over by emitting “siren-like calls for help.” Inspired by the idea, the first remote starter was soon invented in 1916.

Today, alarms encompass two main categories: OEM systems that are built into a vehicle at the factory by the manufacturer, and aftermarket alarms, that are installed after being purchased by the vehicle’s owner. OEM alarms are typically armed and disarmed by use of a keyless remote, and most are put into use by switching the function of the front and passenger key cylinders to initiate an alarm when someone tries to gain access to the cab. Aftermarket systems are much the same but sometimes are disarmed and overridden by a switch mounted somewhere secretly on the vehicle. While the original car alarm monitored the engine specifically, modern day alarms typically monitor the doors and trunks of vehicles with switches integrated into the design of the latch.

Use of electronic systems called immobilizers have been shown to reduce the rate of car theft by as much as 40% according to the Economic Journal. Immobilizers essentially stop the engine from running until the proper key is used to operate the vehicle. Immobilizers therefore prevent the car from being hot-wired after a thief gains entry to the cabin of the car.

The original patent for a car immobilizer was filed by St. George Evans and Edward Birkenbuel in 1919. Their system was operated with installation of a 3X3 grid of double contact switches that sent current from the vehicle’s battery to the ignition switch and spark plugs, sounding the horn and immobilizing the vehicle.

Modern vehicles can also feature innovative safety and security features that help to relocate your vehicle after it’s stolen or moved. Vehicle tracking systems typically use either GPS technology or GLONASS technology (the Russian-based Global Navigation Satellite System) to accurately locate a vehicle. The systems collect feet data and distribute the information to a remote electronic mapping service via the internet, or to directly specialized software.

There are different methods of tracking used as well; active and passive tracking. Passive systems differ from their counterparts by storing GPS locations, speed and headings so trigger an event like movement or out-of-base unlocking/locking schedules. When a device routinely returns to a predetermined point, the system is shut off. Passive systems use downloading to transfer data wirelessly. Meanwhile, Active tracking systems transmit their collected data in real-time to a computer system elsewhere that monitors and evaluates the data.

Whatever your preferred method of safeguarding your vehicle, there’s no shortage of options. While all of the tech on earth can do a great job at recovering or preventing your vehicle from being stolen, locking the doors at night is an often-forgotten technique that could benefit you more than you think. As always, we recommend that you find a solution that’s perfect for your lifestyle and use, but some good old fashioned common sense is sometimes our greatest weapon against car theft.