The 2020 Chevrolet Corvette Stingray is the fastest and most powerful entry Vette ever made. There have been many mid-engine Corvette concepts over the decades but this is the first ever production mid-engine sports car that Chevrolet has ever made. 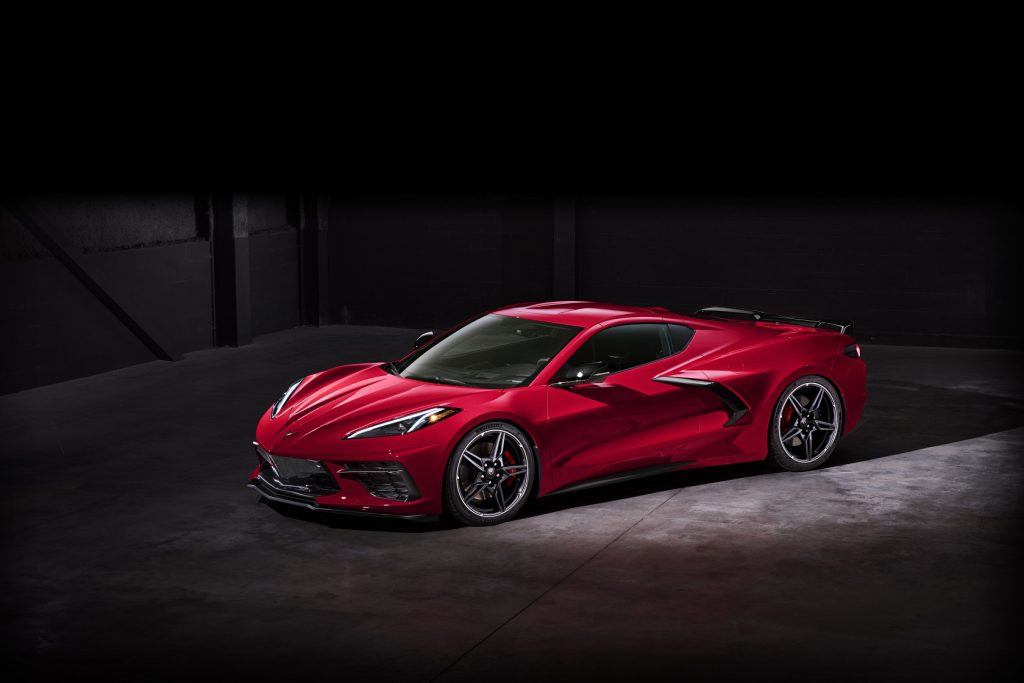 Under the hood, that’s back hood, lies an updated version of the LT1 engine found in the C7 Corvette. Dubbed the LT2, it is still a 6.2L naturally aspirated V8 with push rod and dry sump technology. This configuration allows it to be mounted lower down in the chassis for a lower center of gravity thus improving handling.

It produces 495 horsepower and 470 lb-ft of torque. The numbers are achieved thanks to a new exhaust system and the performance Z51 package. Official 0-60 mph (0-96 km/h) have not yet been released but Chevy says that the 2020 Chevrolet Corvette can achieve the sprint in less than 3 seconds. If that’s true, that would make it just as fast to 60 mph as the C7 generation Z06 which has 155 hp more.

The engine is mated to a new 8-speed Dual-Clutch transmission (DCT). It’s the first one of its kind for a Chevrolet product and was made specifically for this car. No manual option has been announced but looking from the interior pictures, it doesn’t look like they left a whole lot of room for a manual shifter where the current transmission controls are. So don’t expect to see a manual transmission in a Corvette any more. 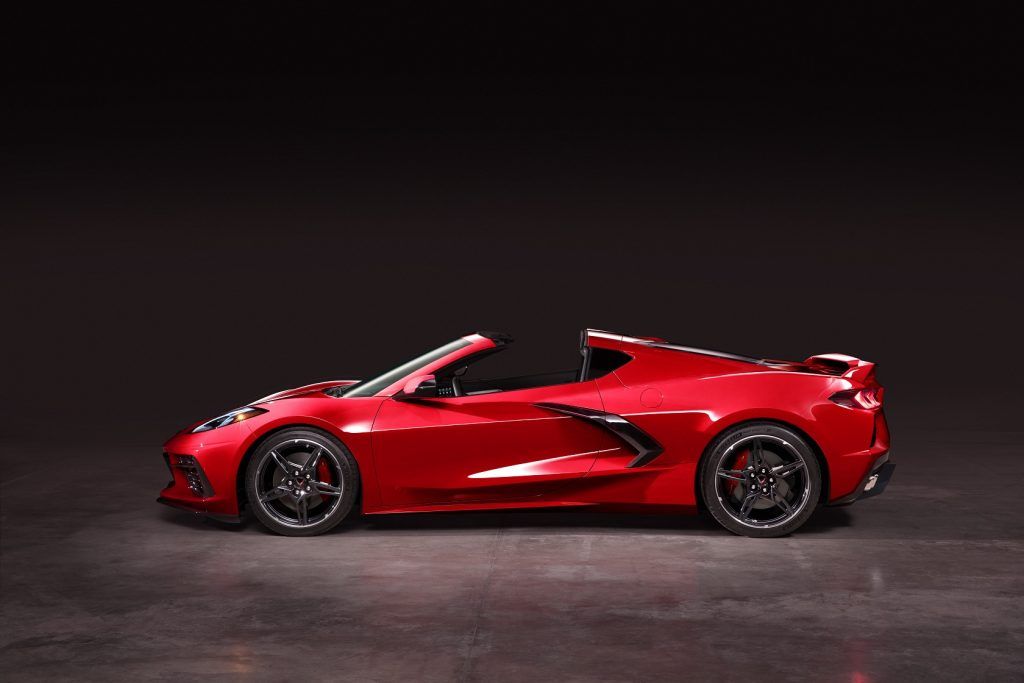 With the engine behind the driver and passenger, the whole cabin had to be moved further forward. Gone is the long hood but the shorter front allows the driver to better see the road ahead. There is a storage compartment in the front trunk or “frunk” as it’s sometimes referred to, as well there is a storage compartment at the very back of the car. The rear storage is actually big enough to store the detachable roof or golf clubs.

The suspension is now full coilover on all four corners. Over the years, Corvettes have been the butt of all jokes for having truck-like rear leaf springs. But with the switch to coilover springs, magnetic ride control, and double wishbones, the 2020 Chevrolet Corvette should handle as well as or better than supercars costing twice as much. Chevy claim that with all season tires, the 2020 Corvette will achieve 1G cornering force around a track.

Another unique feature of the 2020 Corvette is a GPS-based hydraulic lifting front axle. If there’s a speed bump that you always drive over on your daily commute, you can program it so that the car will know where it is and automatically raise the nose so that you don’t scratch the front splitter. This feature can store up to 1,000 locations anywhere on the planet. 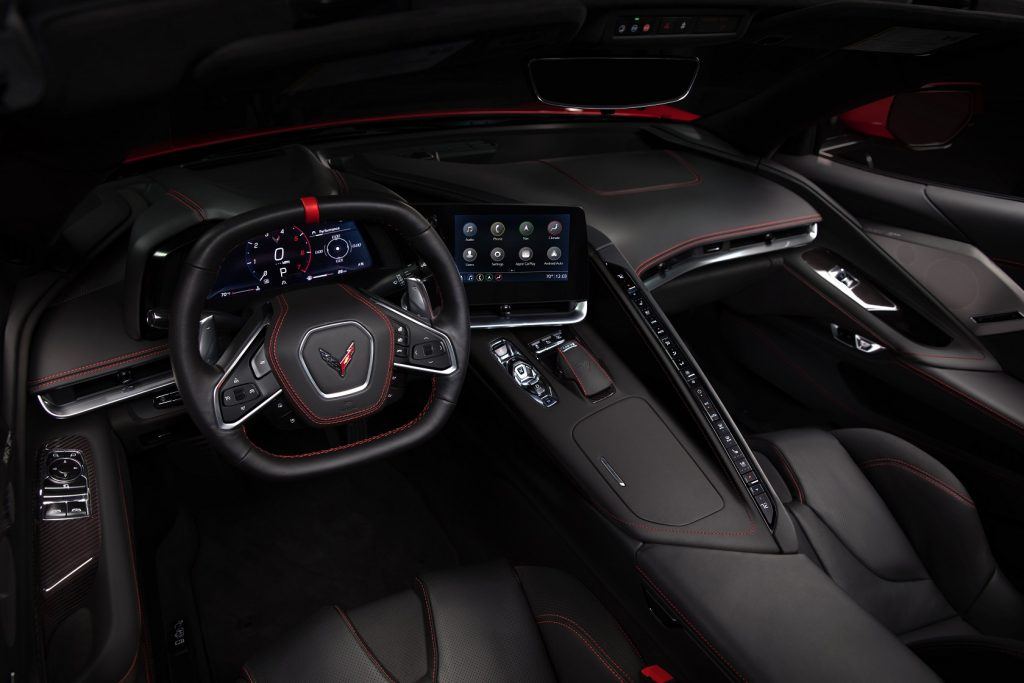 The redesigned interior is now on par with other mid-engine cars in the same class. Three seats are offered with the Corvette; a GT1, GT2, and Competition Sport seats. Each with a varying array of colours and padding options. The steering wheel is a squared-off design with 2 spokes holding it all together. It features paddle shifters in the back along with buttons for adaptive cruise control and radio. A special new button is the “Z” button which allows for a custom drive mode tailored to the driver’s preference. A 12” driver instrument cluster screen displays all of the Corvette’s vital driving information and a driver oriented touchscreen features Chevy’s new Infotainment 3 system with Apple CarPlay and Android Auto compatibility.

By far the most polarizing interior feature is the row of climate control buttons that start from the dashboard and end by the driver’s elbow. No other vehicle in the world has this design and it will be interesting to see consumers will think of it once they sit inside it. 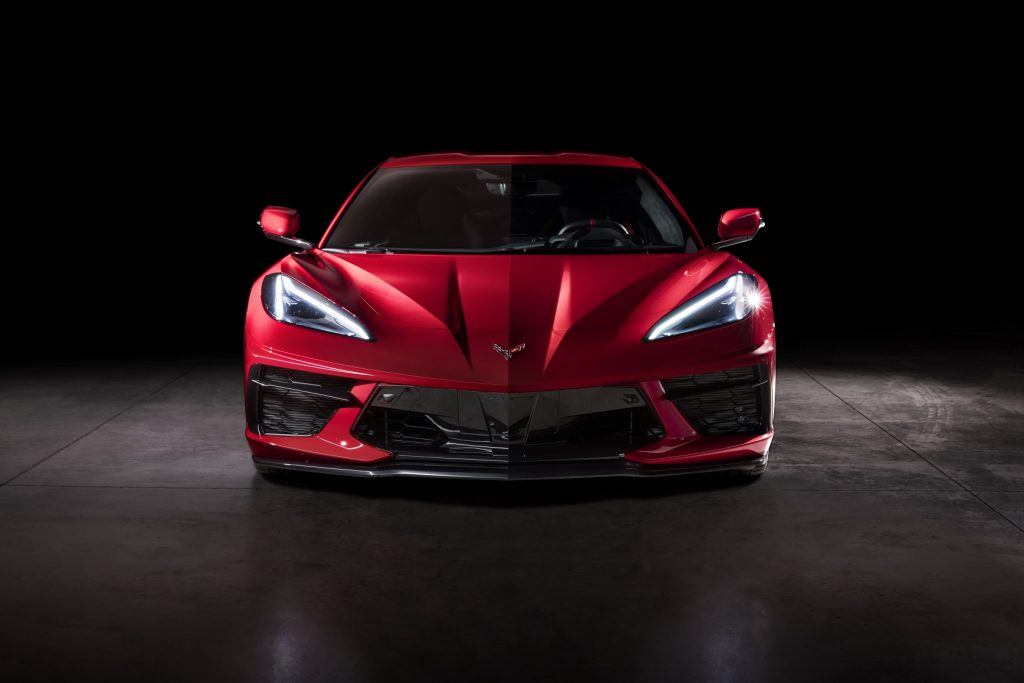 No official pricing or specific delivery times have been announced as of July 2019 but Chevrolet says that this new 2020 Chevy Corvette will have a starting cost of around $70,000 CAD. Production is set to begin in late 2019 at the Bowling Green assembly plant with deliveries shortly after. 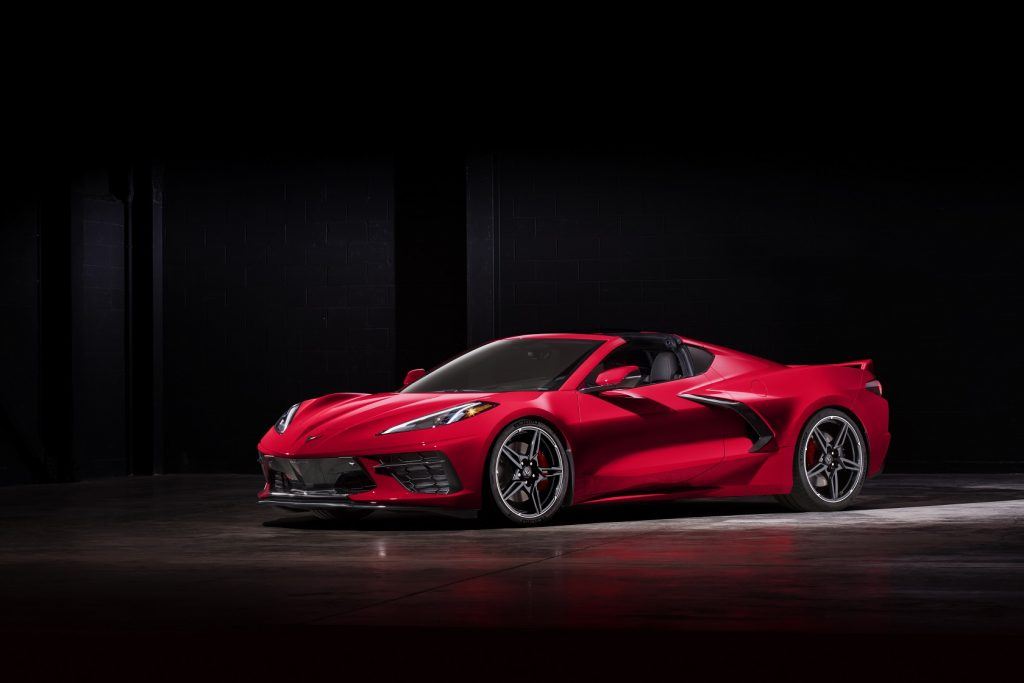 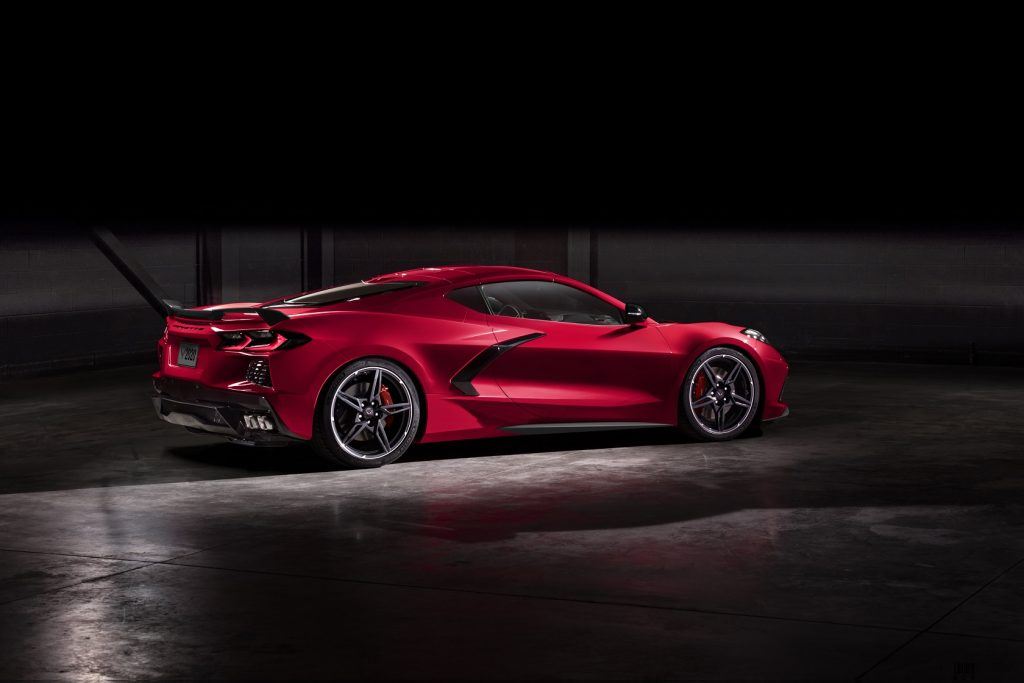 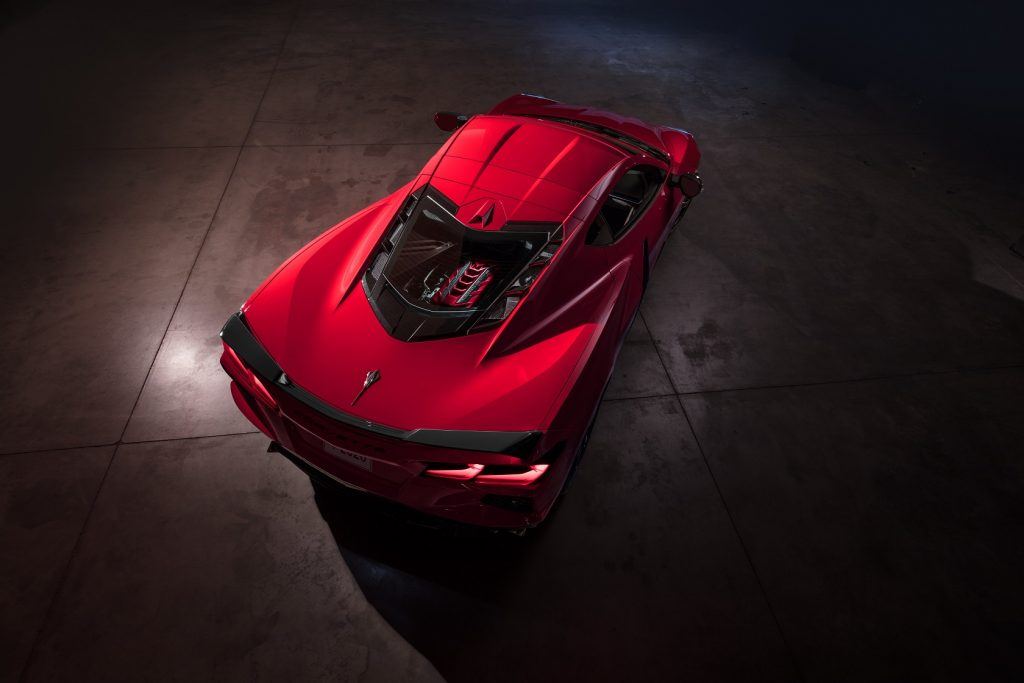 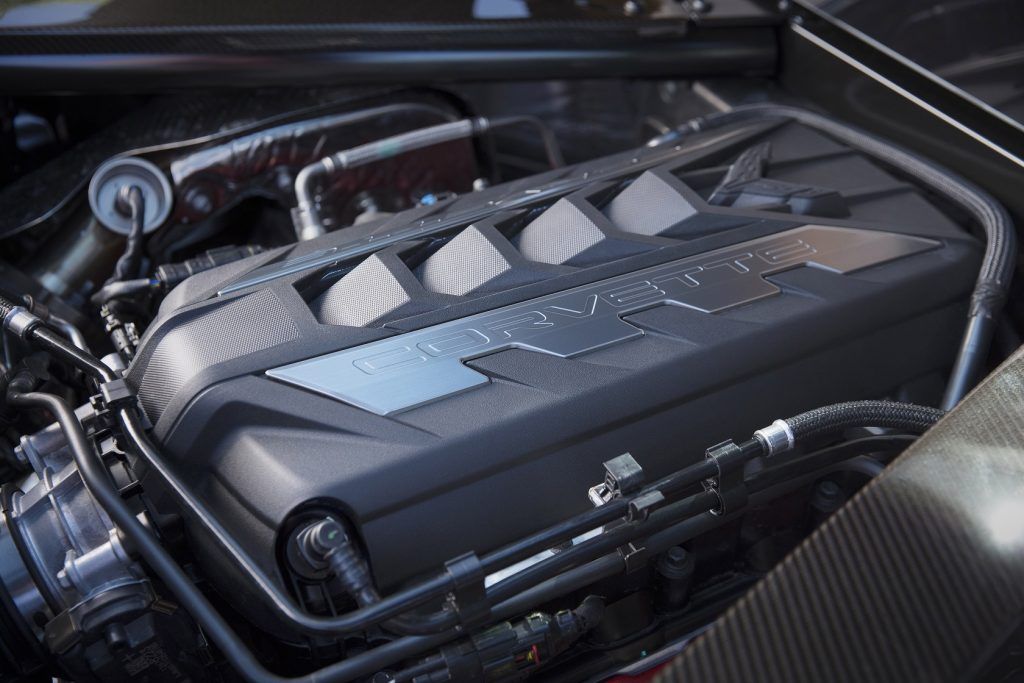 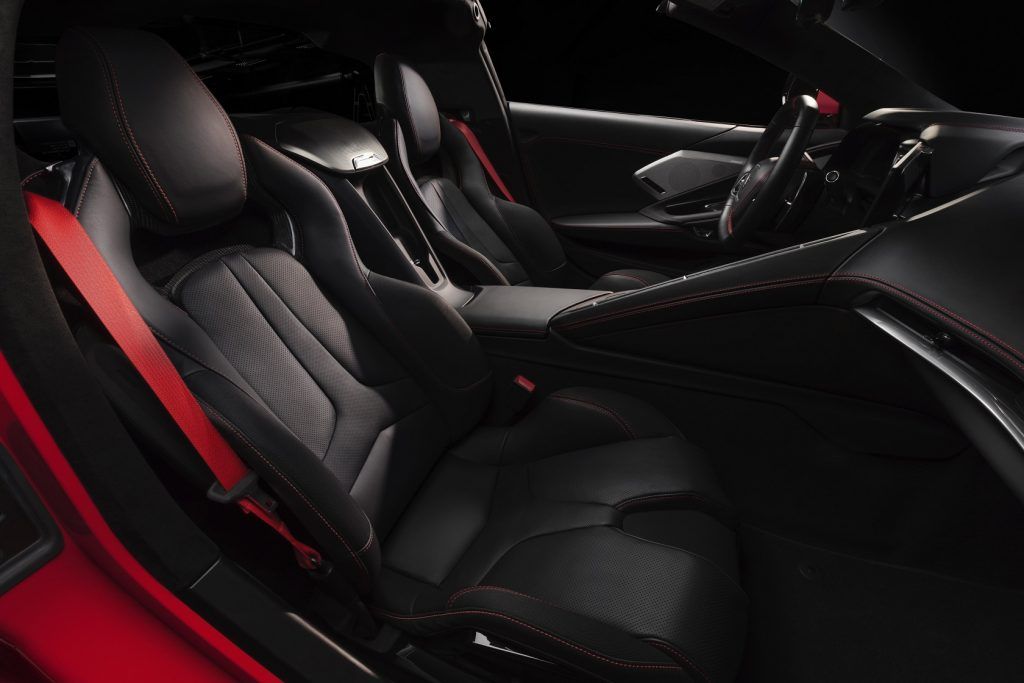 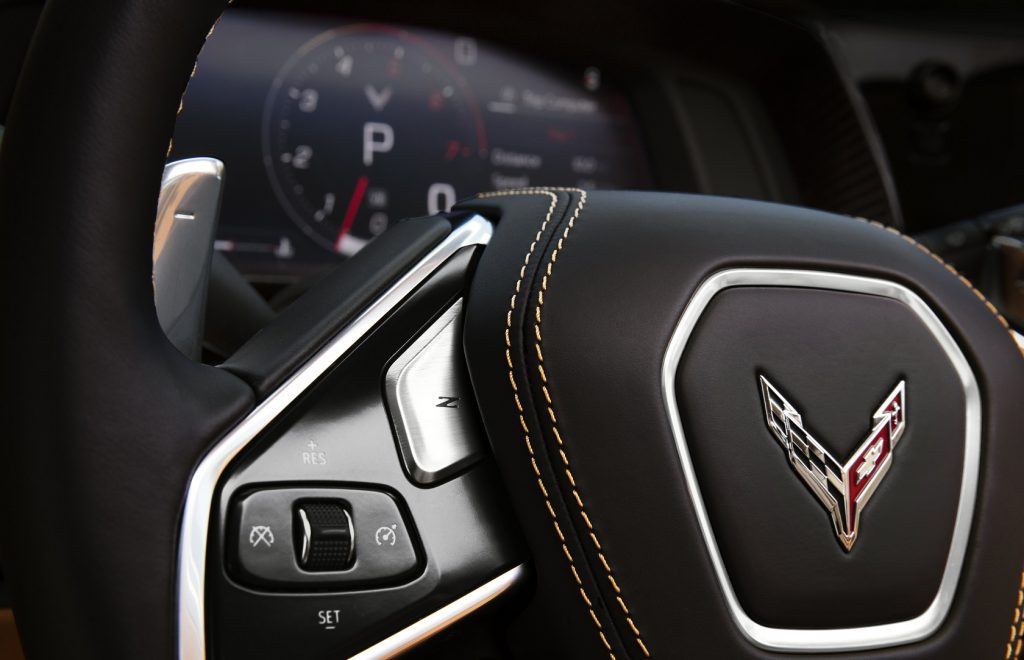 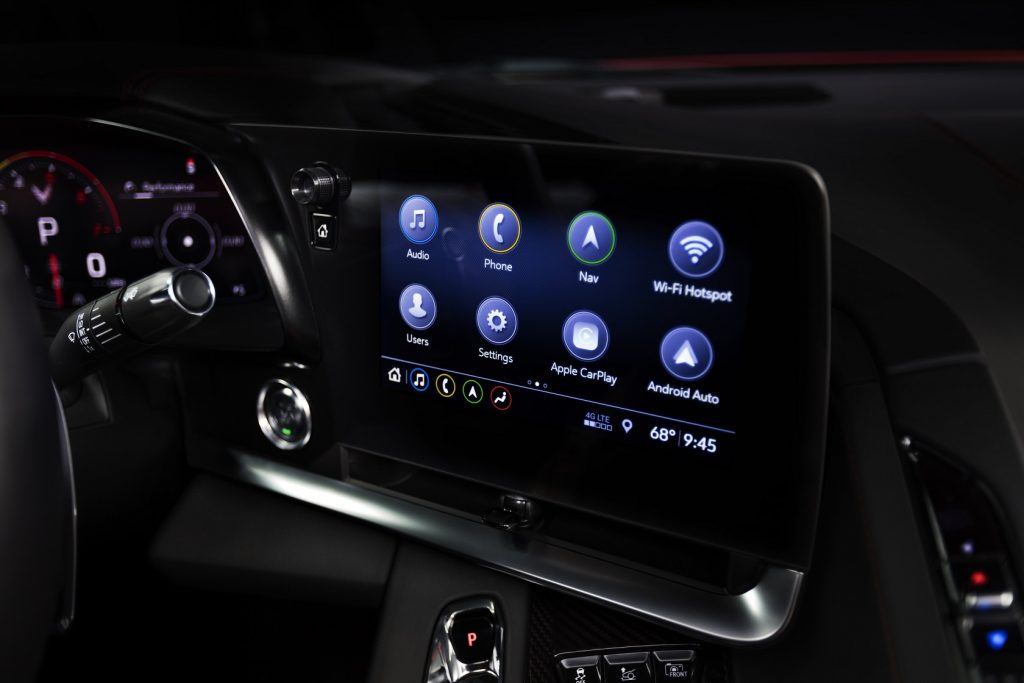