Spotlight on the Upcoming 2019 Chevrolet Blazer

Drivers begged. Chevrolet answered. The iconic and legendary Chevy Blazer is back for late 2019, after a nearly 30-year hiatus. The brooding bad-boy short-wheelbase SUV and cousin to the Chevrolet Suburban will round out the growing Chevrolet SUV family, filling a void in the sporty mid-size SUV segment.

Ladies, and gents, here’s what we know about the upcoming Chevrolet Blazer available in late spring 2019. 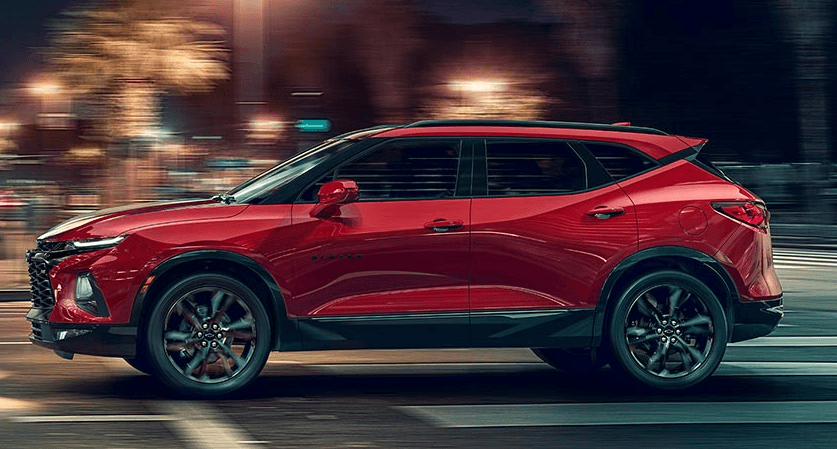 Introduced in 1969, the original Chevrolet Blazer quickly became the quintessential bad-boy SUV, based on a small wheelbase chassis with 4-wheel-drive as a mandatory feature in its inaugural year, meant to compete directly with the Ford Bronco and the International Harvester Scout. The beefy off-road centric Blazer jumped ahead of the pack as a popular choice, outselling both the Scout and the Bronco by 1970, and even urging other brands like Dodge to jump into the segment with short-wheelbase SUVs like the Ramcharger and Jeep Cherokee.

The K5, as it was dubbed by fans, came with four powerplant options: a 4.1L 250 cubic inch straight-6, and 4.8L 292 straight-6, or GM’s 5.0L 307 V8, and the legendary small-block Chevy 5.7L 350 V8. The first gen, 1969-72 K5 came with three transmission options to boot – including a three-speed auto or manual, and a 4-speed manual. The auto transmission is what separated the Blazer from its competition – it successfully married this, and other “luxury” amenities like AC into an off-roader.

The brilliance of the original K5 was its construction and conception; it was a shortened wheelbase pickup truck, and nothing else. It was all about innovating an existing beast – being the Silverado – and used the extra interior space as a selling point while simultaneously lowering the cost of production thank to the shared Silverado/Suburban platform.

Unique to the Blazer and its GM cousin, the GMC Jimmy, these models were equipped with their trademark removable hardtop until 1975.

The 2019 Chevy Blazer comes with your choice of two engine platforms: a standard ECOTEC 2.5L engine, and the available 3.6L V6 that produces 305 horsepower with a towing capacity of 4,500 pounds and an estimated highway fuel efficiency rating of 9L/100 km.

AWD capability is available with both engines, pairing power and confidence with a 9-speed automatic transmission, and a twin-clutch AWD system that directs torque to the left or right rear wheel when you need it most.

The original Blazer was big, brawny, and in charge – and the 2019 Blazer fills that void today in a more modern way – doing away with the massive physical appearance, and focusing on chiseled athletic appeal, sportiness, sound, and style.

With available 20 and 21 inch wheels, the Blazer Premier is the luxurious option in the new Blazer line up. It’s superbly equipped with chrome accents throughout, premium leather appointments, and suede microfiber seating, paying homage to the integration of luxury and strength of the first Blazer.

Meanwhile, the Blazer RS brings back the tough Chevy flavour we know and love. The angular and bulging haunches of the Blazer are accentuated by a custom matte black front grille and performance inspired front air dam, a black bowtie, LED front headlights. Inside, the 2019 Blazer is reminiscent of the Camaro – featuring jet black leather seating in the RS perfectly accompanying red accents.

When car companies choose to bring back a name from their past that’s been missed like the Blazer – it causes some loyal brand aficionados to shudder a little bit. Get this revamp wrong, and the coveted name suffers, losing its luster and its power from the past. But get it right, and the stars align, stoking the company with the fire and confidence to keep the momentum moving in the right direction.

With the 2019 Blazer, we have a pretty good idea we’ll see a vehicle that’s been meticulously redesigned to pay homage to the past while piquing our interest in the future.